Become a SunPower Facebook fan and the “Make an Impact” program donates $1 to SunPower Foundation projects.
SolarDay 2010 is Saturday, June 19.
And a quick take from the SunPower Richmond facility tour. 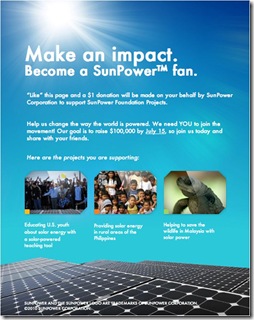 At the end of the SunPower Systems facility press tour, I first learned about the SunPower Corporation (NASDAQ:SPWRA) “Make an Impact” promotion. As shown in the poster graphic, “Like” the SunPower page:

and a $1 donation will be made on your behalf by SunPower Corporation to support SunPower Foundation Projects.

Help us change the way the world is powered. We need YOU to join the movement! Our goal is to raise $100,000 by July 15, so join us today and share with your friends.

Your simple “Like” action will benefit one the these worthy SunPower Foundation projects:

Check out the SunPower Foundation partners; I recognize a few from twitter: @SolarAid, @solarfund, and @BlackRockSolar.

SolarDay 2010
Beginning with a single event last year in San Francisco, SolarDay 2010 (http://www.solarday.com) parallels the growing solar industry with events (map view) held in over 40 cities to enlighten residents about their energy options, the benefits of going solar, and the financial incentives available to make solar happen. Oh, did I mention SunPower is the Official PV Sponsor of SolarDay?

SunPower Richmond tour
To avoid rehashing the same multimedia, I suggest viewing “PHOTOS: SunPower Factory Tour, 25 Years to 1 GW” by Katie Fehrenbacher for Earth2Tech and “Inside SunPower: Why solar thin-film is still under crystalline silicon’s thumb (videos)” by Camille Ricketts for VentureBeat. Ms. Ricketts clips me in the background of one of her videos. Unflattering, carrots are my snack of choice today.

SunPower has not been a focus over the past year, so I did learn a few things during the corporate presentation and tour. Busy and preoccupied at Solar Power International 09, I missed the T20 Tracker Evolution from the earlier design deployed at Nellis Air Force Base. During Utility & Power Plants President Howard Wenger’s explanation of the modular T20 tracker, I learned about backtracking algorithms used to avoid tracker to neighboring tracker module shading. The tracker nearest the sun backtracks from the optimal position to avoid casting a shadow on the modules in the next row and so forth maximizing energy production and minimizing the required land area. More on the development of the T20 can be found in the NREL (National Renewable Energy Laboratory) report, “One-Axis Trackers – Improved Reliability, Durability, Performance, and Cost Reduction Final Subcontract”.

I hope this does not all sound too commercial? Although I’ve been worn down by eSolar, my spirits and solar enthusiasm are buoyed in anticipation of the approaching Summer Solstice.