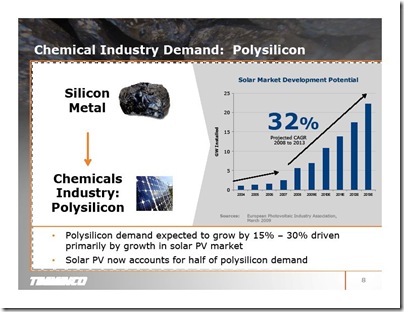 Québec Silicon’s initial annual silicon metal production capacity of 47000 Metric Tons (MT) will be split between BSI and Dow Corning based on their ownership stakes. Given that Dow Corning stopped UMG Solar Grade Silicon Production, it is not surprising BSI retains ownership and control of their solar grade silicon purification operations and facilities. BSI also retains their customers and will honor existing silicon metal contracts with their production allocation.

From Timminco, I understand the evaluation of the expanded silicon metal production project in Iceland (please see “Timminco Pursuing Opportunities to Expand Silicon Metal Production”) continues and is independent of the Québec Silicon joint venture.

This agreement, as well as the acquisitions we announced in November, will provide us with an efficient, sustainable, secure supply of high-quality, chemical-grade silicon metal that is the cornerstone of nearly all of Dow Corning products, silicones from Dow Corning and our polysilicon through our joint venture Hemlock Semiconductor..

The agreement will increase Dow Corning’s supply of silicon metal, which provides security of supply now and the ability to meet future needs.

Timminco and Dow Corning have had a long and successful relationship.

While the closing is subject to “regulatory approvals and the consent of BSI lenders”, BSI can receive up to a $10 million performance bonus after closing by achieving production cost and capacity improvement goals. Should the transaction not close, BSI and Dow Corning have an alternative silicon metal supply arrangement for the delivery of 20000 MT in 2011.

For FESIL, Holla Metall is a cornerstone plant with a stable, competent workforce combined with modern equipment and technology. Four furnaces at Holla produce high quality SiMetal. Holla has developed its own process for granulating SiMetal. No one else has this process. 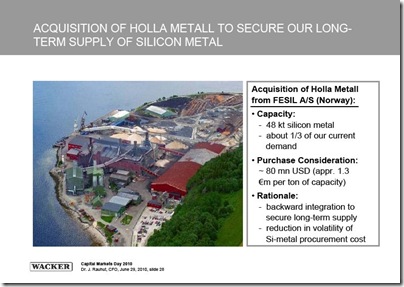 Dow Corning and Wacker use silicon metal as a raw material for the production of both polysilicon and silicones. Certain silicone products from both companies target PV module applications.

Dow Corning’s joint venture approach has expanded their silicon metal supplies to augment internal captive production via minority investments in North America. In addition, Dow Corning has avoided the $6,000 to $7,000 per MT capital cost and 3 to 5 year lead time required to construct a greenfield silicon metal plant as noted in Timminco’s May 2010 Investor Presentation.

In a bit of irony, Dow Corning and Wacker have two silicone joint ventures: Pyrogenic Silica and Siloxane.