First Solar versus SunPower in the US Southwest.

In the course of researching the 12.8 GigaWatt Utility Scale Photovoltaic Pipeline in the US Southwest for my “US PV Market Development in the American Southwest” EU PVSEC presentation, I was surprised how easy it was to identify GigaWatts (GW) of PV projects by First Solar, Inc. (NASDAQ:FSLR) as Approved Contracts in Development, Contract Pending Approval, or at earlier stages of development. By contrast, the largest utility scale project in the SunPower Corporation (NASDAQ:SPWRA) pipeline is the 250 MW (MegaWatt) California Valley Solar Ranch followed by a 200 MW module supply agreement with Southern California Edison (SCE), an Edison International (NYSE:EIX) company. 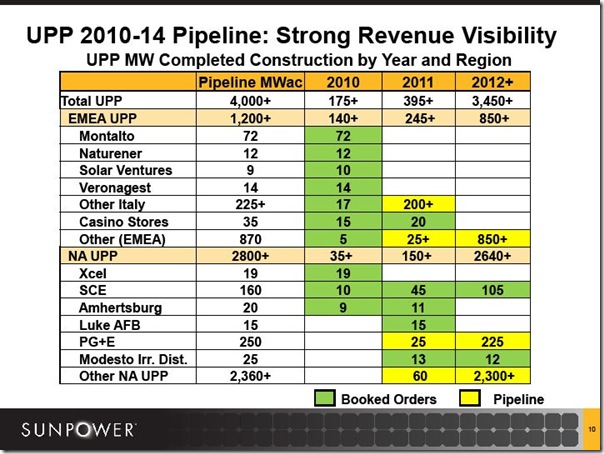 Above is the “SunPower UPP 2010-14 Pipeline: Strong Revenue Visibility” slide presented by SunPower CEO Tom Werner at the Bank of America Merrill Lynch Investor Conference on September 13, 2010. SunPower identifies 450 MWac (MegaWatt alternating current) of near term Utility and Power Plants (UPP) projects in California and Arizona and claims to have a North American UPP pipeline of 2300+ MWac in 2012 and beyond. 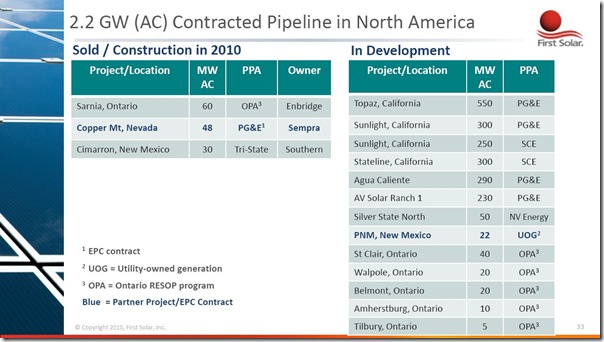 The “NextLight Acquisition Closed” slide from the First Solar Corporate Overview Q2 2010 presentation notes a key objective was to “Increase contracted PPA pipeline to 2.2 GW (AC) and long-term visibility through 2015”. The above “2.2 GW (AC) Contracted Pipeline in North America” slide breaks down the North American pipeline with 2.07 GigaWatts located in the Southwestern US:

Scouring through many sources including the US Department of the Interior Bureau of Land Management (BLM) applications for New Mexico, Nevada, Arizona, and California reveals at least another 4.7+ GigaWatts of First Solar projects at earlier stages of development, most lacking PPAs (Power Purchase Agreements). A similar screen for SunPower earlier in September uncovered two (2) Arizona State Office BLM applications among Proposed Solar Energy Projects under the header Other Projects on File. However, since then, the list has been superseded by Pending Arizona BLM Solar Projects correcting many obvious discrepancies in the proposed project list and reassigning the SunPower projects.

So why is it so hard to identify SunPower’s Utility Scale PV pipeline in earlier stages of development? Let’s recognize First Solar’s Utility Scale PV pipeline is well known through three pipeline acquisitions including OptiSolar, Edison Mission Group, and NextLight. SunPower may just have a different strategy for developing projects on private land, on brownfields, or through special purpose entities to mask their activities. Both SunPower and First Solar are also poised to benefit from supplying other Utility Scale project developers with PV modules if they so chose.

Of course, SunPower has the additional option of using Serengeti solar modules sourced from third party suppliers in select projects. The Serengeti revelation was still fresh when I had the chance to tour the SunPower Systems Richmond facility in June 2010. Hanging towards the back of the tour, I saw the Serengeti modules pictured below, but I only noticed the blackboard comments upon reading a tell. I glanced, took two discreet photos, and looked away.

My impressions from the comment board were positive. SunPower is fostering a strong corporate culture that encourages open dialog even after major strategic decisions have been made.

Anyone so inclined may view or download my “US PV Market Development in the American Southwest” EU PVSEC presentation from Google docs. The PV industry is moving so fast the information is already dated. 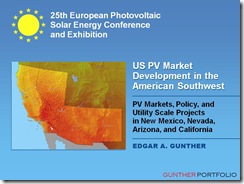