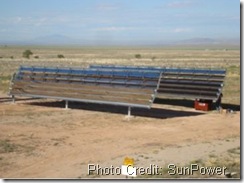 Although there was a hullabaloo at SPI 10 around “SunPower Gets Serious About Concentrators” by Michael Kanellos at Greentech Media, SunPower Corporation (NASDAQ:SPWRA) disclosed their research and development efforts on Concentrator PhotoVoltaics earlier at the 25th European Photovoltaic Solar Energy Conference and Exhibition (25th EU PVSEC) in the Terrestrial Concentrator Systems Session 1BO.6.1:

Alpha-2 LCPV System
The Alpha-2 LCPV system is described by SunPower as “a linear 7X geometric, parabolic-section, single-axis concentration photovoltaic system.” Receiver modules are mounted opposite parabolic mirrors “closer to the mirror than the focal line which widens the flux band and maximizes cell efficiency.” The north-south oriented single axis tracker leverages SunPower’s T0 technology to hold six (6) mirror-receiver pairs mounted across two (2) cross struts. Oriented in opposite directions, three (3) of the mirrors face east and the other three (3) face west. SunPower identifies a few advantages of the design including improved tracking, thermal and optical performance, land and tracker utilization, reduced wind profile, and shorter cable connections between rows in a string.

The top Sandia photo of the “Alpha-2 system consists of the northern halves of two full trackers” and appears to show eleven (11) equally spaced cross struts with 60 mirror-receiver pairs called blades by SunPower. End caps are visible on each row towards the left of the array, indicating north.

In the EU PVSEC paper, the full LCPV tracker implementation is described:

a single tracker consists of two torque tubes driven by a center-mounted actuator. There are 10 cross-struts supporting 54 blades mounted on each torque tube; an additional cross-strut is mounted on the southern end to support one 0.5m mirror for each row. This southern overbuild is necessary for horizontal single- axis trackers due to non-zero solar zenith angles. The power rating of the tracker is approximately 12kW. 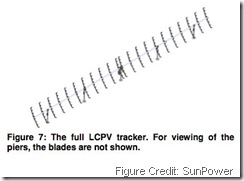 It is unclear if the southern most cross strut section of the northern halves are fully populated with blades or just mirrors. Explaining the blades, SunPower said:

The mirror and receiver are pre-assembled into a blade and shipped to the field as a single unit. It is quickly snapped into the cross-strut and can be easily handled by one person. 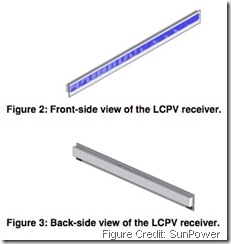 Each receiver is a linear arrangement of 24 series connected quarter wafer SunPower back contact silicon solar cells as shown in the LCPV receiver figures. Per the succinct description in the paper:

There are three bypass diodes in the circuit, and each is connected across a grouping of eight cells. The receiver package is similar to that used in a standard one-sun module with a few minor changes to mitigate the concentrated ultraviolet content and to enhance the reliability of the laminate. A folded fin heat- sink is mechanically bonded and thermally coupled to the laminate back sheet. A monopole junction box is attached to the back side at either end of the receiver.

Off hand, the module receiver design has striking similarities to Skyline Solar as I described In Search of Skyline Solar – Part 3:

Each module consists of two independent strings of thirteen (13) monocrystalline solar cells, sized around one quarter of a 156 mm (millimeter) square cell, accessed by a junction box at each end.

While the module string arrangement differs, Skyline Solar also uses a folded fin type heat sink as can be seen in some of my photos.

SunPower decided on the quarter wafer sized cell for the Alpha-2 LCPV System design because of “a relatively flat efficiency peak from 4 – 7 suns” based on design goals and research presented at the 35th IEEE Photovoltaic Specialists Conference (PVSC 35) held in Honolulu, Hawaii USA, from June 20-25, 2010:

The PVSC 35 LCPV cell paper compared the performance of full, half, third, and quarter sized cells under low and medium concentration conditions. After establishing a baseline with standard SunPower Gen 2 solar cells, the LCPV cell design was modified as follows:

and could still be “produced on the standard SunPower cell production lines.”

Alpha-2 Preliminary Performance Results
Preliminary performance results indicate best strings have a direct resource efficiency of 18.4% (“translated to 850 W/m2 direct plane-of-array irradiance and 25°C cell temperature”) and further translating to 15.6% global efficiency. The LCPV system acceptance angle was determined by analyzing power versus misalignment and “achieved an angular range of ±1.25° in which the power loss was less than 5%.” Also, preliminary thermal data observed the cells operating “on average between 25°C and 40°C above ambient temperatures” depending on the wind conditions.

I requested a copy of the Alpha-2 LCPV EU PVSEC paper and presentation from SunPower after SPI 10. SunPower Corporate Communications sidestepped my request and instead expressed their displeasure with the Serengeti photo (Blog commenters have dubbed it the $/WTF? photo) appended to the A Tale of Two Utility Scale Photovoltaic Pipelines post. Without assistance, I did what any resourceful Photovoltaic Blogger would do. I waited for the paper to be published at the EU PVSEC Proceedings website, and I plunked down my €10 for an official copy. It is a quick five page read and includes numerous details I have not covered.

Congrats are in order for the SunPower LCPV team! I can only imagine the mad scramble to complete the installation and get the preliminary data for their EU PVSEC paper and presentation. I missed and did not even hear about Session 1BO.6.1 until later because I was finalizing and practicing my own less ambitious EU PVSEC oral presentation offsite on Tuesday.