In 2010, California’s solar demand soared to over 465 megawatts (MWs) of new solar rebate applications, an increase of 286% over applications in 2009. 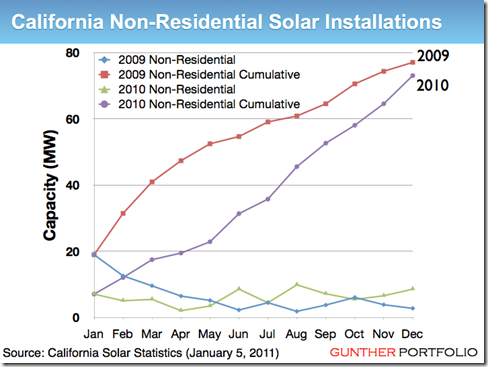 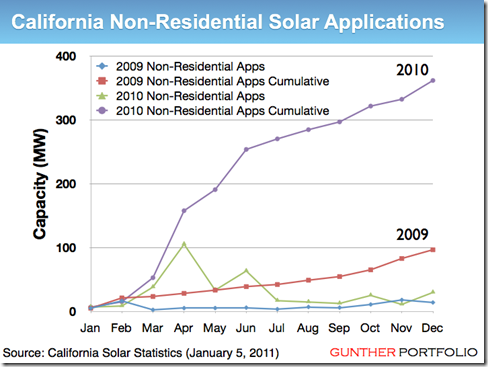 The contraction in 2010 Non-Residential PV installations cannot be explained by uncertainty over the Treasury Grant extension or waning Performance Based Incentives (PBI). Besides permitting and interconnection, California centric issues may be to blame here including the state’s long term economic outlook, budget crisis, and gubernatorial election plus voter referendums Proposition 16 and Proposition 23 confusing the renewable energy landscape.

Exiting 2010, the PG&E Non-Residential Program Reaches Incentive Budget Cap was the news on December 24, 2010, joining San Diego’s California Center for Sustainable Energy (CCSE) in implementing an incentive waitlist for new Non-Residential PV applications. In both cases, the Non-Residential budget has fallen short of the CSI MegaWatt capacity goals for Steps 9 and 10 because of Commercial versus Government / Non-Profit mix assumptions and higher than expected system performance. As noted in the CSI January 2011 newsletter:

The residential sector is not affected at this time, CSI PAs are still accepting and providing reservations for all residential solar incentive applications. Furthermore, nonresidential incentives in SCE territory are still available, although these incentives are nearing Step 8 levels, as SCE has more megawatts currently under review (28.5 MW) than it has remaining (15.33 MW) in Step 7.