Various sources reported an erroneous 7.25 GigaWatts (GW) of photovoltaic (PV) installations in Germany for 2010.
1.17 GW of PV installed in December 2010.

Perhaps in honor of the spring equinox, the Bundesnetzagentur (German Federal Network Agency) released the December 2010 PV system registration data on Monday to complete the year.

In this case, the Bundesnetzagentur press release, “Neue PV-Zahlen und EEG-Statistikbericht 2009” (Google English) had all the relevant facts indicating German 2010 PV installations instead increased to 7.4 GW, not quite doubling from 3.8 GW in 2009. Also, the Bundesnetzagentur observed actual installations in 2010 were below the forecast of 9.5 GW though the source of the forecast was not cited. 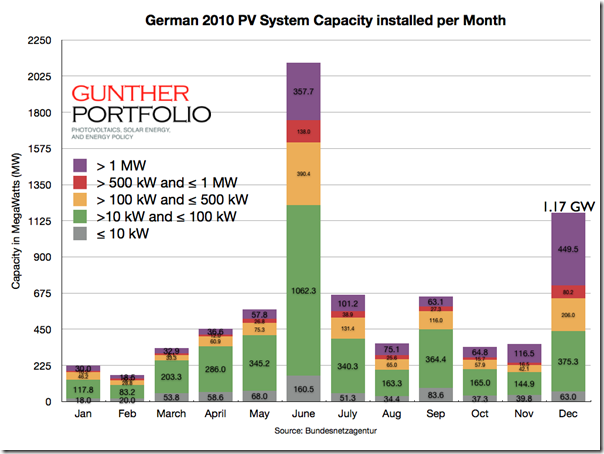 Someone alerted me to the discrepancy, so I can’t swear I would have double checked all the numbers either. The major cause of the confusion was an upward revision of September 2010 installations to 654 MWp (MegaWatt-peak) from 493 MWp. However, there were minor revisions to earlier and later months as well.

As highlighted in the bar chart, over 1.17 GW of PV was installed in December 2010 across 23862 registrations despite the early start to winter. Almost 450 MW of PV systems sized 1 MegaWatt or larger were completed at 148 locations in December 2010. The Rieselfelder Solar Park in Luckenwalde, Germany, was among them and has an official system capacity of 5.993 MWp. The largest December 2010 PV system installation was 18.647 MWp in Brandenburg an der Havel, Brandenburg, while the smallest was 210 Watts in Jengen, Bayern.

PV Solar is also a competitive business on the media and research side, but folks, please double check your facts and spreadsheets before reporting on installation statistics.