Last Sunday, I managed a side trip from Colorado Springs to Alamosa, Colorado USA, for the sole purpose of surveying the Alamosa Solar Generating Project developed by Cogentrix Energy LLC, “an indirect, wholly-owned subsidiary” of the Goldman Sachs Group, Inc. (NYSE:GS).

I pinpointed the Alamosa Solar project location with help from the FINAL ENVIRONMENTAL ASSESSMENT (FEA) prepared for the US Department of Energy (DOE) Loan Programs Office. The half completed site had been captured earlier in the above Google Maps satellite view.

I approached the site after lunch driving north from Alamosa on Colorado State Highway 17 and turning off at Stanley Road. At a distance, I could already see the distinct Amonix CPV solar power systems tracking the weak sun across the level uplands. As I got closer approaching from the south, the prevailing south/southwest winds gusted and blew dust towards the Amonix systems. With a maximum operating wind speed rating of 28 miles per hour (~12.5 meters per second), the Amonix 7700 CPV systems had begun to stow across the array field.

Most of the Amonix CPV systems were stowed within minutes while a few stragglers, perhaps because of wind variation, did not stow until later. By the time I circled the property to the northern construction entrance, every Amonix CPV system had stowed and optically blended into an elevated, monolithic platform from numerous viewing angles. I had missed my chance to snap a photo of the Amonix CPV array field in concerted operation.

Taking photos from the south, west, and north sides of the site, my impression was all or near all of the Amonix CPV systems planned for the Cogentrix Alamosa Solar project had already been installed. In the vein of “Trust, but verify”, I was keen to confirm what Amonix had told me for the Photovoltaics: 11 Trends to Watch in 2012 post. Indeed, the Amonix 7700 systems for the project had not only been manufactured at the North Las Vegas facility but appear to have been installed on trackers. I did not observe any trailers packed with MegaModules awaiting installation though I noticed via photo analysis a few MegaModules of unknown disposition strewn on the ground near the interconnect substation on the western edge of the site. 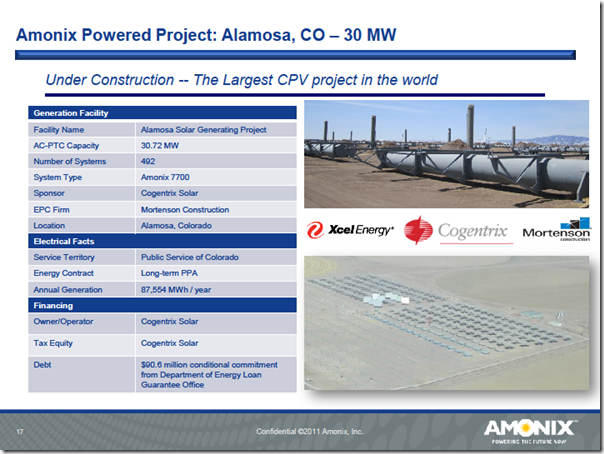 According to a November 2011 Amonix presentation to the Texas Renewable Energy Industries Association (TREIA), the Cogentrix Alamosa Solar Generating Project consists of 492 Amonix 7700 systems for a total capacity of 30.72 MWac and, per the FEA, covers about 180 acres of the 225 acre (91.1 hectares), former agricultural property. I counted over 502 tracker pads in the Google Maps satellite image of the site. Cogentrix Energy’s Alamosa Solar plant will generate an estimated 87,554 MWh (MegaWatt-hour) per year of electricity under the long term PPA (Power Purchase Agreement) in place with Public Service Company of Colorado (PSCo), a subsidiary of Xcel Energy Inc. (NYSE:XEL). The Alamosa Solar project interconnects with the existing Alamosa-San Luis 115 kiloVolt (kV) transmission line belonging to Xcel Energy and located just 60 feet (18.3 meters) west of the site.

On September 9, 2011, a $90.6 million DOE 1705 loan guarantee was finalized for Cogentrix of Alamosa, LLC., to construct the Alamosa Solar Generating Project based on Amonix HCPV (High Concentration PhotoVoltaic) technology. Per “Cogentrix solar plant in Colorado gets $91M fed loan guarantee” at the Denver Business Journal, the Alamosa Solar “plant is expected to cost between $140 million and $150 million” or about $4.56 to $4.88 per Watt AC installed before incentives such as the 30% ITC (Investment Tax Credit).

The completion of the Alamosa Solar Generating Project in the spring will be welcome news for the DOE Loan Guarantee Program.

I only noticed a bicycle rider and a truck from Mortenson Construction, the project general contractor, roll past once during my site visit. The bicycle rider was crazier than me to brave the cold, windy, and dusty conditions without the benefit of a car as sanctuary. The rider became wary of my photography after driving past towards the southeast corner of the project. I censored the photos erring on the side of prudence for once.

I wonder how the project has modeled the impact of Alamosa windstorms and dust common in the winter and spring of drier years like 2012 on electricity generation?