After the recent 10% layoff at MiaSolé, I renewed my search for their second manufacturing site and stumbled upon RESOLUTION NO. 11-7893, “A Resolution of the City of Santa Clara, California, Accepting the Donation of 1000 Solar Modules from MiaSolé”, passed and adopted on December 6, 2011.

The City is responsible for installing the PV modules on land adjacent to Jenny Strand Park located at the southwestern tip of Santa Clara next to Interstate 280 as shown on the Google Map. The PV system will be interconnected to the distribution system of the City of Santa Clara’s municipal electric utility, Silicon Valley Power.

Though subject to change, MiaSolé told me the estimated 2012 project timeline is:

The City of Santa Clara has not yet confirmed the expected timeline.

According to the site plan drawn by McCalmont Engineering, the southern facing 125 kW PV system will consist of ten (10) sub arrays each with one hundred (100) modules arranged twenty (20) lengthwise by five (5) widthwise and tilted at twenty-five (25) degrees. The modules are connected as fifty (50) strings of twenty (20) modules to a lone central inverter. 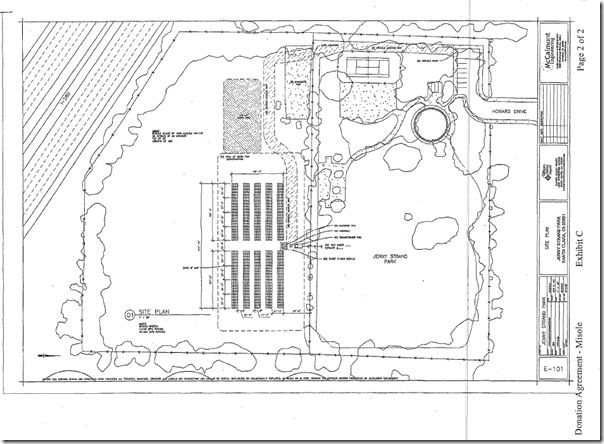 MiaSolé Building 2
Subsequent to the resolution, I found MiaSolé’s second manufacturing building not in Santa Clara as I had assumed but in Sunnyvale around three corners from the Corporate Headquarters. On an afternoon drive, I decided to check out Jenny Stand Park and verify the MiaSolé location. Two Sundays after the layoff news, I found the MiaSolé Building 2 parking lot full of cars, and I presume at full tilt module production. The building has no MiaSolé signs and the front windows are covered with plain brown paper as shown in the inset photos. I’ve heard the new MiaSolé CEO John Carrington may have plans to get some signage and create a real world presence for the company.

A couple of my emails to MiaSolé bounced when I asked about the donation. In the case of the MiaSolé press contact, I heard a media rumor last week alleging that Ben Williams is a fictitious person. I’ve asked a few folks at MiaSolé this very question since then, and either they have declined to comment or ignored it.

Will the real Ben Williams please stand up?