At the SunShot Grand Challenge Summit and Technology Forum, Solexel, Inc. and partner Owens Corning (NYSE:OC) demonstrated tangible progress towards developing a Building-Integrated PhotoVoltaic (BIPV) roofing shingle targeting residential solar installations as part of a US Department of Energy (DOE) Solar Extreme Balance of System Project. The DOE has a way of making past Solar Incubator Program recipients invitations to poster sessions that cannot be refused.

Solexel has made significant progress since the 2010 Solar Energy Technologies Program Peer Review of their Solar Incubator project, “Productization and Manufacturing Scaling of High-Efficiency Solar Cell and Module Products Based on a Disruptive Low- Cost, Mono-Crystalline Technology”.

At least as seen for the roofing shingle project, Solexel has advanced from 156 mm (millimeter) pseudo square front contact monocrystalline silicon solar cells processed from epitaxially grown and released thin-film silicon substrates (TFSS) to 156 mm full square back contact cells. Sorry, I do not know what cell structure was employed though patent applications point to an interdigitated back-contact (IBC) approach a la SunPower. Solexel plans to achieve at least 20% cell efficiency for the shingles.

The Solexel Smart Cells are connected using a backplane with a sine wave like winding on a large area flexible (flex) circuit. I’m not sure what the backplane material was or if it also doubles as the backsheet. Please see Applied Materials: Back Contact Photovoltaic Revolution for similar concepts.

To minimize shading impacts, each solar cell has an individual bypass diode that was soldered to the flex circuit. Solexel has ambitions to integrate additional power electronics onto the flex circuit such as a DC (Direct Current) power optimizer or even a microinverter.

Solexel and Owens Corning have developed a number of design concepts for the solar module and roof attachment panel. Solexel appears to have settled on a 2 x 6 (two by six) cell mini-module using the full square black solar cells as an important aesthetic feature and power enhancement. The mini-module is close to the nominal size of a standard Owens Corning shingle product. The solar module is “mounted in a unique carrier that connects directly and specifically to the Attachment Panel.” One carrier concept resembles a Chip or IC Tray with positions for each of the solar cells as shown at the bottom of the poster photo.

The attachment panel is affixed to the roof in place of traditional roofing materials and includes wiring and BOS (Balance of System) to interconnect the solar modules and tie them back to the home’s electrical service panel and the grid. A prototype end cap integrated a microinverter and connected to a solar module like a building block.

Per the joint Product Development Approach timeline, the BIPV roofing shingle project is still in the Generation I Design phase of three generations with an end goal of delivering a complete installed BIPV system cost of $2 per Watt at scale by 2017.

Solexel Smart Cell Technology
The core Solexel process begins with a reusable monocrystalline silicon template on which the TFSS can be grown. A structured surface layer of porous silicon is created on the template, and the TFSS is deposited using epitaxial growth techniques to replicate the crystalline silicon structure. After the epitaxial growth step, the TFSS is released by separation from the reusable template. 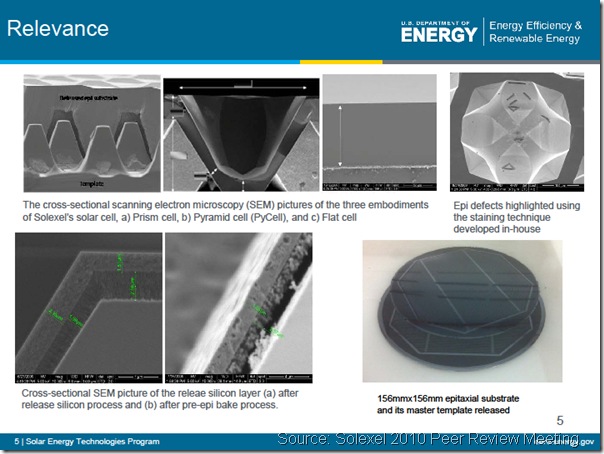 Solexel has demonstrated 44 successful TFSS releases from a single template and has also achieved an NREL-verified conversion efficiency of 14.4% on 156 mm x 156 mm TFSS solar cells. Solexel aims to reduce the TFSS thickness to 30 μm or less, which constitutes a significant reduction in the amount of material required for typical silicon solar cells.

While Solexel has filed and been granted numerous patents from templates and TFSS to cell processing, modules, and production equipment, two IP (Intellectual Property) licenses from Max-Planck Innovation and Imec are related to the core technology. Max-Planck Innovation agreed to a co-exclusive license with Solexel for its Porous-Silicon-Process (PSI process) technology developed by Prof. Dr.-Ing. Rolf Brendel while working at the Max Planck Institute for Metals Research. Here is the World Intellectual Property Organization (WIPO) patent:

(WO1999001893) METHOD FOR PRODUCING LAYERED STRUCTURES ON A SUBSTRATE, SUBSTRATE AND SEMICONDUCTOR COMPONENTS PRODUCED ACCORDING TO SAID METHOD

to a method to deposit a thin film of monocrystalline material on a substrate. To increase the efficiency of the resulting solar device, the method advocated depositing a porous Si layer between the substrate and the thin film. This porous Si layer has both light-reflecting and light-diffusing properties, which helps confining the incoming light in the thin-film layer, thereby improving the efficiency of the cell.

Imec has a number of related patents and patent applications.

Although Solexel plans to reduce TFSS thickness to 30 um (micrometer) or less, the TFSS thickness achieved has never been mentioned. Although the TFSS process is kerfless and requires far less purified silicon, some silicon is still nonetheless required. The CVD (Chemical Vapor Deposition) process uses Trichlorosilane (TCS, HSiCl3) based on patent applications and on the Integrated Engineering Services (IES) Solexel Facility Expansion brief describing a:

New bulk TCS delivery and storage system installation with point-of-use scrubber to enable their state-of-the-art Kokusai processing tool were installed which triggered the preparation of a Risk Management Plan per CalArp.

Solexel garnered recent attention by raising $25 million in Series C funding and adding SunPower Corporation (NASDAQ:SPWR) as an investor during a period of PV oversupply and fierce price competition according to “Update: Solexel, Stealthy Solar Startup, Adds SunPower to KPCB VC Syndicate” by Eric Wesoff for Greentech Media. A Bloomberg report said the funding would support the construction of a pilot production facility in California.

The open questions about Solexel include:

How fast is the TFSS process and what CAPEX (capital expenditure) per Watt is required?
What TFSS thickness has been achieved and what is the cell efficiency?
Can existing cell production equipment handle the TFSS?
What is Solexel’s initial business model?
Has Solexel been developing mainstream modules in addition to the BIPV project or will they enter the PV market as a TFSS “wafer” or cell supplier?
Will SunPower be Solexel’s first customer for monocrystalline thin-film silicon substrates?

So all will become clear quite soon.