The latest on SunPower’s return to Concentrating PhotoVoltaic (CPV) systems.

At the CPV USA 2012, 4th Annual CPV Summit, SunPower Corporation (NASDAQ:SPWR) Manager of CPV Receiver Development Zachery Judkins presented “The State of LCPV Commercialization” providing an update on the C7 Tracker. Low Concentration PhotoVoltaic System, SunPower style was my first post on the SunPower LCPV (Low Concentration Photovoltaic) system before it was launched at SPI 2011 as the C7 Tracker.

The 100 kiloWatt (kW) C7 Tracker installation at Sandia National Laboratory, Albuquerque, New Mexico USA, has been performing within 1% of simulated performance over the past year as shown in the slide photo. Mr. Judkins said it was easier to model the LCPV performance since about 80% of the diffuse light was thrown away and was dominated by DNI (direct normal irradiance).

ASU Polytechnic
Partnering with the Salt River Project (SRP) and Arizona State University (ASU), the first commercial 1.1 MegaWatt-peak (MWp) C7 project was driving piers into the ground about two weeks ago and should be operational by yearend. Located on the southeast corner of ASU’s Polytechnic campus in Mesa, Arizona USA, SRP will buy all the electricity generated by the C7 solar plant via a PPA (Power Purchase Agreement) with SunPower. In turn, ASU will purchase all of the C7 plant energy for use on the Polytechnic campus.

About eighty (80) C7 Trackers are shown in the SunPower slide drawing for the ASU installation which is just short of 1 MWp per the C7 Tracker datasheet with 12.4 kWp (kiloWatt-peak) power for each tracker. So either the tracker power rating has increased or eight (8) trackers may have been added.

Tucson Electric Power
The second 7 MWp project for Tucson Electric Power (TEP), a subsidiary of UniSource Energy Corporation (NYSE:UNS), will begin construction in the first half of 2013. Owned and operated by TEP, the project consists of four (4) 1.5 MWac (MegaWatt alternating current) Oasis C7 Power Blocks as shown in the layout drawing. Scheduled for completion by 4Q 2013, SunPower is trying to pull in the commissioning and operation of the C7 solar plant.

I asked TEP if the project will be located at The Solar Zone @ the UA Tech Park (University of Arizona Science and Technology Park) in Tucson, Arizona USA, and the TEP spokesperson said “We’re still working on some aspects of this project and don’t have a final location to announce at this time.” I suppose a suitable building is required for the 2 MegaWatts of SunPower T5 Solar Roof Tiles included as part of the planned facility.

Depending on the progress made on the Suncore 50MW CPV Project in Golmud, Qinghai China, this may only be the second largest CPV system in the United States, not the world, upon completion.

Background and Technology
After the 2008 financial crisis, SunPower grappled with the evolving PV economics of market oversupply. How could capacity be expanded in the future at lower CAPEX (capital expenditure) than Fab 3 in Malaysia? How could the cost reduction of SunPower’s signature back contact silicon solar cells be accelerated down the manufacturing cost curve?

One answer was embedded in SunPower’s DNA; the back contact solar cell technology was designed as a CPV cell. In the convergence of business, market, and technology considerations, the SunPower CPV development program began in early 2009 as a start-up within the company.

Under 7 suns, the cell efficiency is 22.8% and the module efficiency is 20.1% resulting in a 10% relative performance boost and a 10% reduction in thermal losses at concentration. As a result, the temperature coefficient drops from -0.38 to -0.32 percent per degrees Celsius (°C) improving high temperature performance. The C7 module receivers are expected to cost between $0.25 and $0.50 per Watt after fully exploiting the manufacturing cost curve. 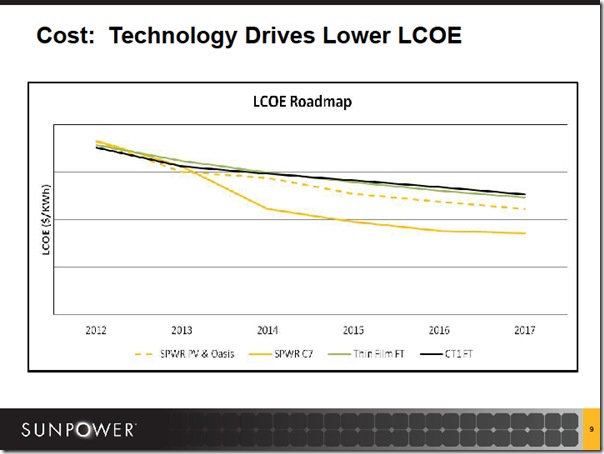 Besides the cells, the C7 Tracker leverages SunPower’s single-axis tracker technology and deployment expertise and glass mirrors proven in CSP (Concentrating Solar Power) plants to lower the LCOE (Levelized Cost of Energy) by 20% without materials risk. SunPower believes the C7 Tracker provides a better platform for future cost reductions and will outperform both thin film and crystalline silicon utility scale installations on an LCOE basis in 2013.

In comparing LCPV versus HCPV (High Concentration PhotoVoltaic), the C7 Tracker has a lower height profile, less land area required per MW, and the potential for wider cost effective deployments since 18% of diffuse light can also be captured. HCPV keeps the edge in dual land use by virtue of the near ubiquitous dual-axis pedestal trackers.

As a cool thing, SunPower said the modular receivers can be snapped into the tracker quickly, and two workers can build out a C7 Tracker in about 1.5 hours. Much like the Skyline Solar X14 System, the C7 Trackers could be upgraded in the future with higher power and lower cost receivers.

Officially retired SunPower founder Dr. Richard Swanson talked about CPV earlier this year during his SunShot Grand Challenge: The SunShot Swerve presentation. Although he was not talking about the SunPower C7 Tracker, Dr. Swanson said:

You might call this the moving target issue.
This has been an issue all along in our community.
That the cost target keeps moving down.

I know it very well from my days trying to do High Concentration PV with silicon solar cells.

We never could catch that moving target at the time.
Now people have taken over using high efficiency cells and that approach and maybe they will.

But it is a difficult job because every time you think you’ve got ready to go to market, you come up for air and you find that now the price points have gone down from where you planning a year or two earlier.

In “SunPower’s next capex spending cycle not until 2014: touts cell cost reduction” by Mark Osborne at PV-Tech.org, SunPower President and Chief Executive Officer Tom Werner said C7 receiver capacity “would be somewhere between 50 and 100MW in 2013, with the ability to ramp production very quickly.”

=If= SunPower can deliver on that scale of C7 Tracker projects in the Middle East or elsewhere, they will vault to a leading position among CPV firms.

Please vote in the sidebar PV Poll: How much PV will be installed worldwide in 2012?