The Carrizo Plain flyover reconnaissance idea began with my first target of opportunity visit to the California Valley Solar Ranch. My ground surveys of both utility scale photovoltaic (PV) solar projects, the First Solar, Inc. (NASDAQ:FSLR) 550 MW (MegaWatt) Topaz Solar Farm and the SunPower Corporation (NASDAQ:SPWR) 250 MW California Valley Solar Ranch (CVSR), were unsatisfying. Accessing these huge PV plants from the ground was akin to the story of the blind men and the elephant.

I conceived of taking aerial photos of each project and in tandem. I even rented a wide-angle zoom lens for the occasion. However, my photography skills and execution fell short of my aerial ambitions. Although I checked the Cessna aircraft window by opening it halfway before takeoff, it did not fully open when I was ready to take Carrizo photos in the air. This had been a given for the Chevron BrightSource plane. I should have been prepared to remove the screw at the retaining bracket while still on the ground.

Under the circumstances, I adapted to the limited shooting angles and managed to rattle off almost 800 photos over the Carrizo Plain using the continuous release mode. As I was reviewing the photo stream in iPhoto, I realized it would be cool to create a time lapsed video of the image sequence as shown above in 1:44 minutes.

On the approach to the Carrizo Plain, I saw what looked like another solar project and asked the pilot to change our heading to investigate. Alas, this was a false siting and turned out to be an unidentified crop with row upon row covered in clear plastic. From here, our course took us south towards Topaz passing it to the east. After looping around CVSR, the tour was completed with a Topaz over flight heading north. 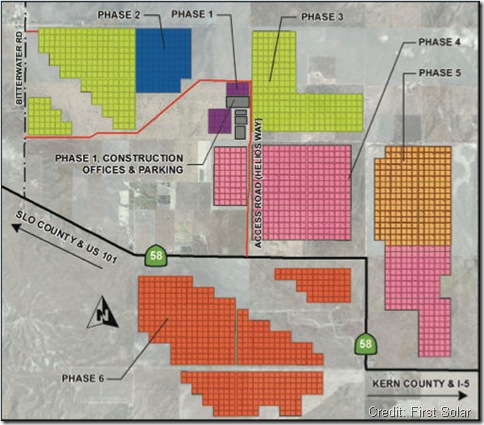 The Array Issue 5 September 14, 2012, Newsletter for the Topaz Solar Farms Project, has a simplified site plan with the locations of Phases 1 through 6 as shown above. Comparing the site plan to the aerial photos, module installation has been completed on Phase 1 and Phase 2, and appears more than 50% complete on Phase 3 eyeballing the western and eastern portions.

“A Road Trip To SunPower and First Solar’s Giant Solar Farms in California” by Ucilia Wang details her tours of the Topaz and CVSR projects last month. At the time, First Solar said:

Earlier this month, the one millionth solar module was installed at what is the largest solar project under construction in the world. When complete, the 550-megawatt AC project will include nearly 9 million photovoltaic (PV) modules.

The Topaz Solar Farm has a PPA (Power Purchase Agreement) with PG&E Corporation (NYSE:PCG) and was acquired by MidAmerican Energy Holdings Company towards the end of 2011.

CVSR Solar Farm
Also last month, NRG Energy, Inc. (NYSE: NRG) and SunPower celebrated energizing the first 22 MW of the CVSR with the electricity being delivered to PG&E under a 25 year PPA.

Proven reliable in the past, the SLO County Project Manager’s Current Status Sheet – CVSR/SunPower reported the Processing Status on September 13, 2012, was “Phase 1 Energizing” with the comment “Substation permit finalized allowing commercial sale of power for Phase 1 (about 22.7 MW of electricity); landscape bonding and final closure (decommissioning) plan resolved (completion of report review underway).” For December 2012, the status is “Phase II & IV Energizing” and the comment is “End of year target for commissioning/ Energizing of Phases II (66.36 MW) and IV (41.04 MW).”

Speaking of Mr. Cheyney, be sure to check out his Solar Curator site that is perennially in beta much like Google software.