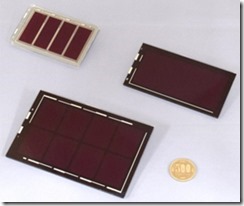 I bumped into Fujikura Ltd. at the IDTechEx Show Demonstration Street hosted in Santa Clara, California USA a few weeks ago. Fujikura had single, four (4), and eight (8) cell DSC modules on display optimized for indoor applications.

As shown below in Figure 2 from the Fujikura paper, the DSC conversion efficiency increases under low light conditions versus multicrystalline silicon (mc-Si) solar cells, and, per Figure 3, DSC conversion efficiency is almost flat regardless of the incident light angle. Therefore, DSC powered IoT sensor nodes can be positioned outdoors to maximize the application benefit without much regard for the DSC module’s sun orientation.

To optimize for indoor use, Fujikura developed technologies to match DSC spectral sensitivity to indoor fluorescent and LED lights, designed for electrode conformation, and prepared an electrolyte to significantly decrease leakage current. After the optimizations, the indoor DSC achieved over 20% conversion efficiency under 1000 lux illuminance outperforming competing amorphous silicon (a-Si) solar cells by almost two times in the same conditions. In this case, DSC powered IoT sensor nodes can operate under dim indoor light conditions typical of a warehouse. 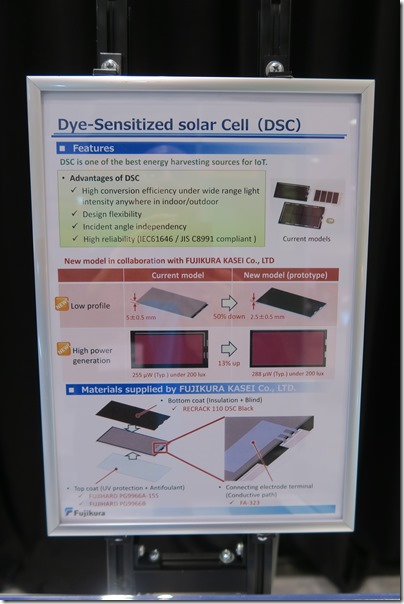 Fujikura is producing about two thousand (2000) FDSC-FSC1G 180uW 4 (cell) series DSC modules per month and plans to increase production in 2017 up to 10000 modules per month depending on demand. The DSCs are manufactured with a low energy process based on screen printing using nontoxic materials.

Current 4 series module list pricing is less than $30 in 1000 unit quantities, and, in 2017, Fujikura is targeting less than $17 per unit depending on volume.

Degradation and product warranty terms are not indicated in the DSC brochure.
Fujikura just states the DSCs are IEC 61646 compliant. I suggest contacting Fujikura for further product details, mechanical drawings, and reliability data.

I still feel as though I have not woken up from a nightmare for the past few weeks. No such luck though.